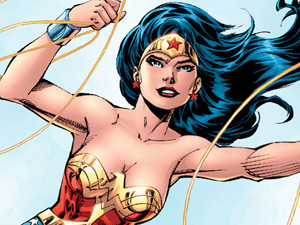 For this culminating project, I wanted to examine the role of women in comic book culture, both in the way that they are represented in comics themselves and in the way that they experience comics and interact with other members of the community.
"I want to have my future career and education revolve around [comics]. I want to document the history of comic books and comic book culture and put out books that stand out because they’re not written by old white dudes who can only look so far into claims of racism and sexism in the industry/culture/fandom spaces."

When asked what she looks for in comics, she answered, "I look for good art, tight storylines, fewer instances of women twisted into improbable positions for the male gaze, and funny quips when they’re necessary."
Currently, Zina keeps up with three Marvel titles: Gambit, Hawkeye, and Ultimate Spiderman.

Sexual Objectification of Women in Comics

I asked Zina, “Has reading comics ever made you feel negatively about yourself?” She answered, “Yes. Figuring out that only a certain kind of superhero mattered (white, male, buff) when I was little really threw a wrench into my plans to be a superhero and I was upset that I couldn’t be like most of the superheroes out there.”

For people in minority groups, reading comics can feel alienating when you can’t find any positive representations of people like you in them. Especially after the New 52, DC’s recent reboot, readers have been wondering when things are actually going to change and when DC is going to diversify their titles in a way that reflects the many kinds of people who read their comics.

In June 2011, when DC was criticized for the lack of female writers and artists in the New 52 (the percentage of female creators decreased from 12% to 1%), the company released a statement, saying, "We hear you." They promised to improve and work with more women. "We’ll have exciting news about new projects with women creators in the coming months...We know there are dozens of other women creators and we welcome the opportunity to work with them."

Zina feels that DC has not upheld this promise. “They’re putting on a good show, but still putting out more of the same material.”

"I think the comic book industry nowadays needs to grow up. They’re catering to a group of people that don’t all want what they’re getting while ignoring the fandom that isn’t made up of old white dudes. They’re ignoring demographics and vocal people in favor of more of the same grim, dark, and gritty."

"The biggest problems in comic book culture are the sexism, heterosexism/homophobia, and racism. There are also lacking positive portrayals of trans* characters and characters who aren’t stereotypes of their respective minority groups. The industry puts out these bland and uniform books where issues aren’t addressed except barely and mostly incorrectly and then the fandom follows suit in holding up these perceptions.

On the New 52, she says, “It's boring...I actually like that they’re trying to streamline the canon and push for timelines that make sense, but at the same time, the fact that their canon currently has benched or depowered most of the women/children/people of color in the universe that had important roles makes me see red.”

I asked Zina whether she has ever encountered hostility or conflict in fandom, and she replied, “When haven’t I encountered hostility or conflict in fandom?” She described various arguments she had gotten into with popular members of fandom and how her confrontations with them had caused others to alienate her. The disagreements she has had were about things like fan elitism, racism, and other problematic occurrences in fandom. The first argument she had was with an extremely popular fanartist who criticized fanfiction writers and shamed them for writing certain kinds of stories. “After I [challenged her], I was essentially persona non grata in fandom. I got rude anonymous messages. The friends I had made in fandom made excuses for (username omitted) and distanced themselves from me. People literally stopped reading my stories because of it. To this day, I get s--t from people about it and a lot of the popular people in fandom don’t deal with me because of it.”

Another conflict occurred when Zina called out another popular fanartist for being racist. This fanartist had whitewashed a character in their work, drawing them with a lighter skin tone than they actually had. Upon being criticized, "her response was to use anti-black racism as a joke and put the character in literal blackface before blowing her up and making her fat. It was racist and sizeist and all around gross...and it made me feel unsafe so I called her out. I reblogged her post and called her a racist as it is the proper term for someone who is using anti-black imagery to have a laugh. I lost more followers and got rude messages and reblogs of the post and it was upsetting that these people would look and see anti-black racism and go “it was just a joke”. In addition to that, [the fanartist] never apologized or took down the picture."

Because Zina spoke up about things in fandom that offended her, she was ostracized and attacked, demonstrating how fandom can become a scary, unsafe space for people who don't blindly follow the status quo. "...if you criticize anything, [other fans] lose it and use disgusting language in order to attack. This has been my fandom experience, being abused and attacked for speaking up about things that angered me."

"Being a part of the comic book fandom is like being in high school again, only it's like attending a very small private high school that thinks that only a few people that attend the school are worthy of going there.
You're excited to be part of a greater thing because it's a good school and there's a lot of history, but at every hallway you see posters reminding you that the only type of woman is a damsel or that the only important people at the school are the big white dudes. It's erasing and uncomfortable and when you complain to the teachers about it, you get told that you're lucky they let you take any classes.

And then when you think you've found your clique and you've made your little niche away from the sexism and the reminders that your school doesn't want you, someone swoops in and helpfully reminds you of it. And your friends are torn between getting angry on your behalf or telling you to apologize for not fitting in because they're trying to get in on the same environment without any trouble."